A while ago, my one-day-to-be sister in law had mentioned a local groomer that she used for her 3 dogs, a pomeranian, yorkshire terrier, and her chihuahua. She mentioned the groomer was a local lady who did it in her house but not only did an excellent job, she had great prices!

Bogart, my fun-loving australian shepard/border collie mix has an extreme shedding problem.  I don't know what his mix is, but sometimes I think husky, and I think he has a freaking shedding problem that gets on my nerves.  Living at Michael's parent house (for the time being) with those other dogs sometimes being there, the hair is just crazy.  So I brushed and brushed Bog and still, the hair was out of control.  Finally I called the groomer, Karen, whose name and number was on our fridge (should we have taken the hint earlier?). 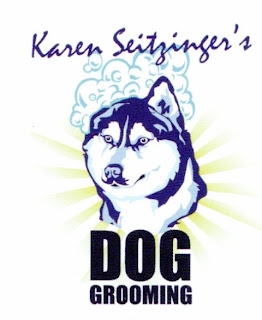 The day no one could take it anymore, Michael called Karen and sure enough she let us bring him over the next day.  I went to drop Bog off, Karen came to my car from her driveway and her whole demeanor just seemed so kind.  Bogart was kind of scared, but she seemed to know what to do with him, and so naturally.  She went over how she was going to do it, and agreed to my special requests.

A few hours and only $35 later, Bogart was picked up and smelled AMAZING! He even looked five pounds lighter she got so much hair off of him!  And the best part (besides the little money), he had a cute little handkerchief around his neck when we picked him up!! I wish I had a picture.  Karen did great and we will definitely use her again. If you live in upper Montgomery County or Frederick County, I HIGHLY recommend you use her.  I feel she has great experience, great prices, and she did an amazing job.  She is way more personal than getting it done at Petsmart- in fact, I have two horror stories from them; one being that I saw a lady shoving this dog around through the window and when I told the manager they said they had heard those complaints about her before...the other being that they nearly drowned a friend's friend's puppy, the dog had to be on a respirator and I believe she even sued.  Ahhh! Uggghh! Grrrr!

Moral of the story, give your dog a whiff, if he/she stinks, call Karen.  Here is her contact info:

Here is Karen with her three dogs, Sierra, Cheyenne, and Bear. 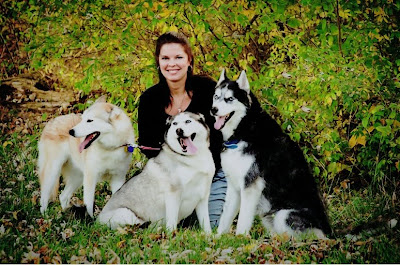