Do you remember the smell?

I have been obsessed with buying records lately. This weekend at 2 flea markets, BeeGee's, Jackson 5, a bunch of Nat King Cole and Sinatra were bought, as well as a Diana Ross.

Today I drove past Joes Record Paradise, I had no choice. I got Talking Heads, The Police, Woodstock, Sly and the Family Stone and Al Green. I had more, but Mike told me to be please be rational.

I need clothes for my cruise but records are becoming an obsession.

P.S. I watched Rachel Getting Marries yesterday, and it had my dream wedding in it. Its almost as if I wrote the wedding for the movie. It was completely jazz/reggae/violins/hindu/ belly dancing type music and just a beautiful hindu type set up. The cake was a blue hindu elephant and I was in love with it all!!

I don't pay that much attention to boxing fights, but I know things here and there. This fight hurt to watch. All those replays!! The fight was only two rounds. The winner (Pacquiao) is going to fight Floyd Mayweather, who's dumbass is coming out of retirement. I just hope he gets his ASS BEAT!

but made me laugh way too hard:

Mina: I wish I was eating a Jewish dinner tonight.
Mike: Why you're fucking christian you faggot.

Did/does it really exist?
Posted by Mina at 4:49 PM No comments: 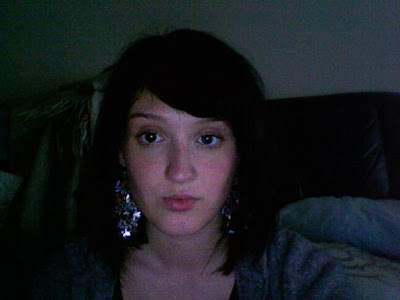 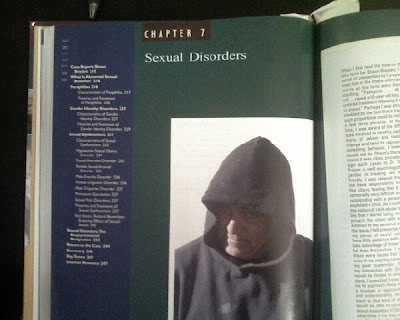 I am a little stressed about my financial situation and what I am doing might have repercussions and I am really scared. I hate working where I am and all people tell me is, "a job is a job." But truthfully, I would rather sit my ass at home and volunteer and collect the $100 less I would be getting with unemployment rather than working in an office with spazzes. My job duties here are things like copying things, cleaning up peoples offices that I cleaned before I left, just STUPID shit.

I will NEVER do administrative work again unless I absolutely have to. And then people say to that "never say never," but you know, people told me I would never find a part time job that pays enough to go to school full time and I did, people said I would never get hired as a medical assistant with no experience, but I did. Bottom line: I end up really fighting for what I want and thats what I eventually get. So at this point, I WILL find that job that pays me around 40k and it WON'T be just admin bull shit. I need a real role, I need to handle my own work and have specific projects and things to do.

It's so ridiculous to me the way these people act about specific Department of Energy people. The conference we are doing they get all crazy about. Example, we are trying to book the White House tour for Russian officials, and my boss doesn't want to do it because it says its subject to cancellation. Well DUH its the effin White House. I think the Russian officials will understand if there is something going on that the tour has to be canceled. I don't think Department of Energy will say, "damn you Link Technologies, you will never have a contract with us again." Such BS.

Anyway, Spring Break is next week, I get to go to Florida for the first time to visit Tina and her baby for a few days. 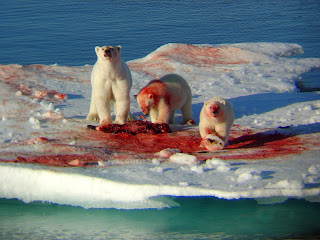 -I made meatballs for the first time yesterday, that jaunt was off the HZOOK!

-At least once a week I have a "Mina-day" where I DON'T feel like speaking to anyone when I get home, it's weird.

-I don't know how I am going to fully pay my bills this month cuz UE check hasn't come.

-I woke up in hives this morning

-I need to cut off my split ends

-I bought a yoga mat and dvd and have been doing it, more about that later.

-My puppy's getting big!

My two weeks of not working were wonderful. I slept too much, ate too much shit, smoked too much, and got things done too. I have two HUGE bags filled with shit for salvation army. I need to go through it and pick out Mustard Seed stuff and put my books on half.com. I really need to focus and do this and some studying today when I get off at 3. This weekend I killed myself playing football for over 3 hours. I could not walk the next day. I got a TD though w00t w00t! Yoga. I suck at it. Even downward dog starts hurting my wrists. This is bad. I am getting old! But it's no excuse seeing how old ladies who live in Chevy Chase with gray hair can do it. Back to taking B complex!

Well, hopefully working part time and getting off at a lovely time will give me time to concentrate on school more, being healthier with yoga and my pup AND football starting, and DUH! blogging more :)

One more thing, just saw this yesterday, and loved the messy short hair, might cut mine soon since it wont grow more anyway: 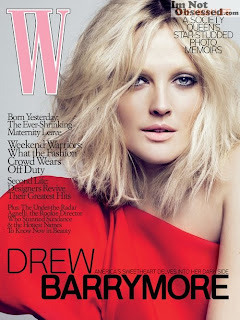 Is it weird I have mixed feelings about this? No matter what I think it's sad though.

I ABSOLUTELY can't wait for.... 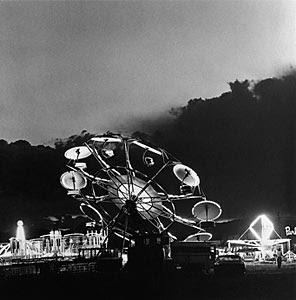 This mornings ride to work

all that was missing was....

We gonna rock unto electric avenue

I had to get away. No longer talking to the one I love, for the first time, absoultely no contact. So far it's been hard. But to make it easier I went away over the weekend so that I could force myself not to lay around like I always find myself doing these weekends (as of late).

I decided several hours before I left, rushed home and packed far too much, as always. This time I took the chinatown bus. Fell asleep the whole way there. Once I was there I was stranded and a bit annoyed, my face was full of SHIT, I had a terrible headache, I just wanted to get to Ruths pad and fall asleep.

The next day I woke up late. Face still FULL. My throat felt like I had a bubble just stick in the back, wanting to pop. My ears and hearing diminshing as well. But my winter-wonderland was near. It was snowing and I was excited. The plan was to go to chinatown but it didn't happen. Eventually went out to union square and got everything I have been wanting from forever 21 for the past 3 months, and some more (excpet this one dress). But that was successful. Of course through out my whole trip I spent too much, I don't even want to look at my bank account. For once, I will be alright though.

I'll fast forward to later in the night when we finally went out. Music sucked at places, it was all electro shit, and I needed good music in my life. I needed biggie, I needed reggae, I needed anything I could sing and move to freely, just so I didn't have to think. Finally, the DJ played what I requested- I was told he would if I danced by him. So I did what I had to do. Soon, a dyke fell in love with me. She told me I was the only one in there that really knew how to dance. I danced with her a little, not even sexual really. But she insisted on putting her chain around me and telling me I was cool as shit and I gotta come to NY more. Her name was "She" for Sheena. That was interesting.

Sunday, I got up in enough time to get my daily NY Dunkin Donuts and head to chinatown for my bus ride. The lady at the counter was this eency-weency-tiny BITCH. She was so rude to only white people. It was incredible.

I intended on blogging on the way back. But before I nodded off, I jotted down things I was pondering on a bar reciept, things to blog about. Things I just read about in ID mag. I'll save some of the good shit for later. Some of the other notes looked like this:

- life & colds, going to work (I think I was thinking about how colds don't affect our going to work anymore, being an adult rarely leaves room for excuses).
- fashion designer- (I think I was reminscing on at one point when I was little I wanted to be one)
- blocking shit out for a long time (I guess I was thinking about how I would be needing to do this)
- Know when I get back to normal, slump (self explanatory, and yes, last night was REALLY hard)
- Roomates (I realized not having roommates allows me to self loath and be lazy because there is no one around to make me do otherwise, this might be bad)

Maybe this will all make me go out and do some more self discovery, go open myself up to this world, there is so much to see after all! Even a night of listening to some jazz would be beneficial.
Posted by Mina at 9:54 AM No comments:

Ruth: They're all too chill and like "Oh. Heh heh heh, cool." Just bouncing off of each others dullness. They're like 'The Hills' people.
Me: I want to go find Whitney. Let's go find her.
Ruth: Bwahahahaha

Bitch, shut the fuck up. 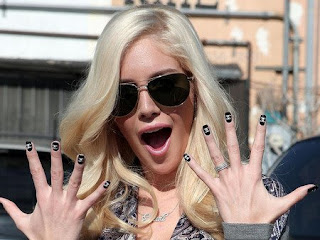 Just watched Gonzo, the Hunter documentary, and even though I understood this before, I understand it even better now:

Also, some good songs that fit nicely to the documentary:

# The Rolling Stones: “Sympathy for the Devil”

# Jefferson Airplane: “Somebody to Love”

# Brewer and Shipley: “One Toke Over the Line”

# Janis Joplin: “Piece of My Heart”

# Creedence Clearwater Revival: “Have You Ever Seen the Rain?”

# Elton John: “Candle in the Wind”

# Norman Greenbaum: “Spirit in the Sky”

I sat here an tried to think of eventful things in 08. Sadly, I don't remember too many significant things. Unfortunately, lots of being unhappy in the beginning of the year I believe.

In January, not many came out to my birthday, and I remembered being sort of sad about it. The next few months after are sort of a blur. I had started a new job at the doctors office and soon after fell into swollen lips and hive outbreaks, only to find out it was stress. I barely visited new york this year, but when I did, I accidentally spent $60 on a lapdance. BLOWN (silly story- ask me).

I learned to be a good worker. I traveled to Nicaragua and had an amazing time. I re-realized drinking still isn't my thang. I busted my ass working and schooling full time, and am very proud of myself for that. I tried to spend some time volunteering or doing good deeds.

I took the time to enjoy christmas and enjoy my christmas tree. I got myself a macbook, and a new job (that I plan on taking very seriously).

I took the election very seriously and fell in love with our new president. I watched the world change.

The thing I gathered most about myself is that I overcame some type of shyness. I think I am much better at conversating with people and just enjoying me for me. I think I still have some improvement to do in social settings, but I know I am very friendly and open, and I enjoy it.

I never make resolutions. And I still don't have any for this year. But I suppose I will try my best to make myself happy, be a good worker, travel, and VALUE life....oh yeah and write more :)
Posted by Mina at 6:45 PM No comments: