A couple weeks back I had been browsing the Forever 21 website for some inspiration on outfits (seeing as I won't be buying any for a long time), and on the front page I saw they now offer Maternity clothes?!  I had a couple feelings about this. 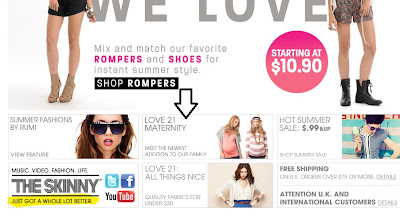 My first instinct made me think of the 13 year olds who dress at Forever 21 PLUS shows like MTV's 16 and Pregnant-  actually yes, my brain can think two things at the same time in case you were wondering.  I guess I somewhat feel that our society/media is making youngins feel more ok about getting preggo at a young age.  Yes, this has been happening for years in America, but it's definitely spiked (I even wrote a paper about it last semester).  What do you think?  Is the media making teens think it's acceptable and easy to be a pregnant teen?  I don't know, it was just my first instinct.  But then I checked the link out to make sure the models at least looked older, and they did I suppose.  Plus not all Forever 21s carry Love 21s clothes, but some do.  And some might say that this isn't even a valid argument, just because young girls see a Victoria's Secret in the mall, that doesn't mean they will want to dress in sexy lingerie?  But then again, I have seen 13 year olds all up in the thongs in good ol' Vickys. (Note: I can see both sides of this question I've posed).

Anyway, my second thought was, 'daaammmmnnn, why couldn't this be around when I was preggo!?'.  I always wished I could find cute maternity clothes for less, since the main maternity clothing stores are pricey for one, and two their selection is often....boring, to put it nicely.  I mean I kid you not, a plain long sleeve shirt was like, $26.

So what do you think?  Could this be a controversial thing?  Would I be one of those journalists who make something out of nothing? Hmmm.

p.s. Speaking of pregnancy, little Dev turns 8 months tomorrow, I can't believe it!!!
p.p.s. I have a big announcement soon-ish....and NO, I am not pregnant.
Posted by Mina at 11:15 PM