Pretty much every lady out there knows there's no such thing as the "perfect mascara."  It's just impossible.  I had been on a mascara hunt/craze lately because I had noticed my lashes were really short at some parts- meaning, that they must have broken off!  This had never happened to me before, so I knew I needed to take better care of them.

I have long lashes, but the ends are blonde and they are so straight that when I am la natural, it looks like I have no eyelashes.  I luckily discovered the solution in 7th grade when I watched my aunt curl her lashes.

But anyway, about a year or two ago I found a mascara in my car from www.tubeyourlashes.com, it's simply called, Tube Your Lashes.  I thought I had heard of it before.  One day I decided to try it, and that was the closest I've EVER been to the perfect mascara.  It instantly lengthened my lashes.  They were sooo long!  They never clumped, and it's incredibly easy to wash off without giving you raccoon eyes.  That's the best part about "tubing" mascara.  I actually bought another one from their website, but Michael accidentally threw it away (and I hadn't even had a chance to use it!).  So because I didn't have the money, I just stuck with drugstore mascara.

I searched for tubing mascara and the only drug store brand I found was the L'Oreal Double Extend Mascara.  I never used the white part you are supposed to put on first.  Here are some Pros and Cons:

Pros:
- no raccoon eyes because of tubing
- lengthens and gives some volume
- lasts a long time

Cons:
- it can be clumpy if wait to long to reapply
- it stuck to my eyelash curler always
- my eyelashes started breaking off!

So my hunt began again.  I tried the Lash Blast and didn't like the clump.  I read some reviews for Revlon's Grow Luscious Lashes, and tried it.  I really am pleased with it so far.  While it is kind of hard to get off without makeup remover, when you touch your lashes they feel super soft.  The trick about this is people buy it because they think it's going make your lashes grow.  They see the percentage on the package and automatically think "drug store latisse, yes!"  But no folks, read the words after the percentage.  It says "94% of people saw instantly more and longer lashes."  Well DUH!  That's what mascara is for.  It never tricked me, I just bought it because people said it made their lashes soft.  Some claim that after 3 months of use they noticed more lashes, but I dunno bout all that.  Maybe only because the lashes were healthier? 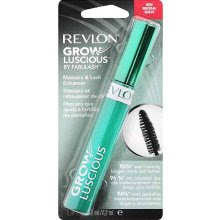 Cons:
- doesn't make lashes grow
- kind of hard to get off
- some people complain about the wand being too big (but it doesn't bother me)

So there ya have it!  I say definitely give it a shot or try some tubing mascara.  I swear by them.  I still want to try a tubing mascara from Sephora, as well as the Maybelleine Falsies.  Oh, and if you go to www.makeupalley.com, you can see reviews AND pictures of what people's lashes looked like after application.  I might post a picture eventually.
Posted by Mina at 10:18 PM