This past week has been a very strange one, it's almost been like an awakening that I need to calm things down a bit, stop, take in, breathe, revitalize, and to "keep calm and carry on."  I had first seen that phrase on a poster in someone's kitchen on my favorite interior design site, Apartment Therapy.  I thought someone just scored a cool poster, but then I saw it more and more and I just googled it now, it's actually a British WWII propaganda poster from 1939.  I think I am going to order one to post somewhere in my home to remind me to keep calm and carry on, on a daily basis: 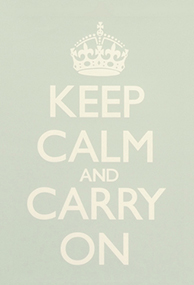 $25 from decorativethings.com
So basically, as you know, I started a new job.  Things were going well last week as my first week.  But after work I overwhelmed myself with the etsy store, being a mom, blogging, and working with a deadline for a client I was doing personal shopping/styling for.  I guess it was a pretty stressful week.  Thinking back on it, it just seems blurry and like it was so long ago.
Then this past week, work started getting weird.  The things that bothered me about this job and the 4 people (including myself) started sticking out.  Then I got in trouble for one mistake.  I don't like making people unhappy and it really bothers me when I do so.  I basically got told I need to think about if I really wanted to be at this job.  The next day I worked hard and did what was expected, but it still wasn't good enough.  The past couple days my stomach had been messed up and then Thursday, I just couldn't hold anything down anymore.  I told my work I needed to go home, and was told horrible things like I seemed clueless, and I was drama (what?!), and they would think about if they wanted me back.  I went home, took a nap, and woke up to excruciating stomach pain.  No one was around, Mike was in a long test, I couldn't stop vomiting and I knew something wasn't right, I had to call 911 and got taken to the hospital.  My white blood cell count was high (as it was after my c-section), and they said my intestines had stopped working.  They admitted me.  Hours later, I found out that something was wrong with my liver and they had to run more tests.  Michael had called my job to let them know I wasn't coming in Friday as I had been admitted.  They asked if I od'd on tylenol (uhhh, no!?!), did a tylenol test to see how much was in my liver, and there was barely any.  Once I got re-hydrated and finally kept some food down, I got released Friday.  But they still don't know what's wrong and I need to follow up with a primary care doctor.  As Michael as driving me home, I got a call from my old job that had laid me off after being there 2.5 months, it was when everyone got laid off- and basically offered me my old job back.  I was/am so happy.  It was like a miracle.  It IS a miracle.  Perfect timing, and just what I needed.  It's like it was a sign for another new start.
I came home, and things just seemed different.  Wednesday night, we had given away our dog to some awesome people with another dog, we knew Bog would be happier.  I took it easy, watched a movie and relaxed.  I woke up today and still just feel weird.  My stomach started hurting again pretty bad, but I'm feeling ok otherwise.  I'm just trying to relax, appreciate what I have, and really focus on being healthy overall.  I need to make that lifestyle change.  I need to start eating better and exercising.  I need to not put a million things on my plate and overwhelm myself.  This whole thing was just a wake up call for a lot of reasons.
This posting has been long and personal enough.  So on that note, I'm gonna go get dressed, enjoy the beautiful weather outside, and go run some errands!  Oh, and I am dabbling in the idea of cutting my bangs, so we'll see.  Oh, and Devin is just walking everywhere!  It's so cute.
<3
Posted by Mina at 2:26 PM