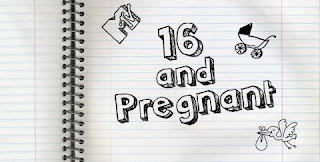 One of the shows I began watching while I was pregnant was MTV's 16 and Pregnant.  I tried not to pass judgment, but I think most will agree when I say they were/are all kids having kids.  Most of the time I watched with feelings of horror, and annoyance; there were plenty of eye rolls on my behalf, trust.  But what did get me emotional were the births.  In fact, whenever I watched anyone giving a birth I would get that way.  And the funny thing is, I was NEVER emotional during my pregnancy!  In fact, I only cried two times the whole 9 months (swear to God)!  For some reason, the hormones became opposite considering I was quite emotional while not preggo.  But anyway, the births did make me tear up often times.

The one thing that got me then, and still gets me now with this new season, is that it seemed none of these girls breastfed their babies!  Is it a generational thing?  Maybe MTV didn't film those parts?  It just seemed you would always see bottles or formula.  Now, I suppose their may be an issue with them being minors, but you never even heard them speak of it.  It really bothered me.  I always wondered about this.  Did anyone else notice?

Update: As I was driving around today, I was contemplating this blog and how I might have been offensive to non-breastfeeding mothers.  But, I do want to say if you chose not to breastfeed, that's your deal, and I am not passing judgment.  I just found it weird not ONE of the teen moms did (that we know of).  So, I hope I didn't offend anyone!
Posted by Mina at 6:11 PM