Do you have a cat or dog?  If so, you've probably heard about the FURminator.  Michael first found it online beccause Bogart has such a shedding problem.  He checked out the reviews, and most had great things to say about it.  I looked into it, but the cost was a huge con.

The one day, I went to petsmart, and saw that the smallest one was on sale for like $30 or so.  They range from like $25-$70 depending on the size.  I finally used it today on both my long haired cats, and YES, I did get a lot out.  See pic below: 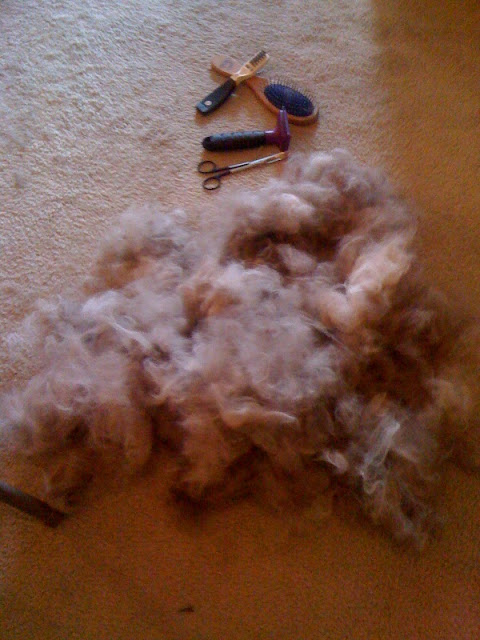 Isn't that f'in ridiculous??  This is just one cat, mind you.  Now yes, long haired cats have a lot of hair, but Bobbi's quite small and her hair isn't even as long as most long haired kitties.  Bobbi usually loves being brushed, but she wasn't happy about this at all.  She did had several mats, which makes brushing and getting rid of them pretty painful.  However, I still got out tons of hair, clearly.

FURminator claims to take away loose hairs and undercoat hair,  (it's the purple brush in the picture).  If you look closely, you'll find that the "bristles" are actually blades.  Although my cats even feel thinner now, I am sort of wondering if it just thins out the hair, or if it really does get out a lot of loose hairs.  Obviously, any blade is going to easily get out a lot of hair.  I guess time will tell to see if it really de-sheds them.

Pros:  It clearly got out a lot of hair.  My cats both feel very thin.  It also seemed to pull out some hair like a brush would, but whether it was loose already or not, I don't know.  Some people prefer instead of the hair falling on the ground, that the brush bristles capture it, which won't happen with this brush/blade.  However, if you want to get out a lot of hair, then the hair falling on the ground will be more beneficial than it staying in the brush (which people this is easier to clean, I disagree).

Cons: Some negative reviews say that it only thinned out their pets hair.  Others said that it doesn't work with all types of dog hair.  Other reviews also said that their animals did not like to be brushed by it.  From my experience, neither of my cats liked being brushed by it AT ALL.  If you have a very matted cat, you will want to get a special type of blade to get those out instead of using this, as it will be very painful to pull it out of the cat.  Lastly, the FURminator is pretty costly.

Only time will tell if it does indeed help with the shedding! I'll be sure to let you guys know.
Posted by Mina at 5:22 PM